How many times have you been told ‘You can’t do that?’ Angela Jobson decided she was going to write TV drama, no matter what the doubting voices said, and she has kept the faith through the many knockbacks of rejection slips, recession and folding training schemes. This is her story of persistence, and of how […] 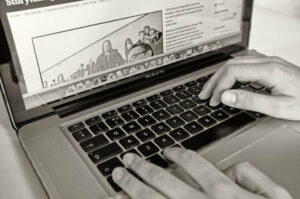 How many times have you been told ‘You can’t do that?’ Angela Jobson decided she was going to write TV drama, no matter what the doubting voices said, and she has kept the faith through the many knockbacks of rejection slips, recession and folding training schemes. This is her story of persistence, and of how an online screenwriting course helped her grow in skills and confidence.

‘What do you want to do?’ The eternal childhood question, to which a shrug of the shoulders would suffice. But secretly, I did know; I wanted to write TV Drama. As a child I’d voiced this once, only to be firmly told, ‘You can’t do that.’

Shortly after completing my degree course as a mature student, a postgrad prospectus arrived in the post, on the list of courses: ‘Screenwriting for Broadcast’. As the new term started I was back at Uni, one evening a week, learning the basics of writing drama. It was the start of believing I could.

I wrote a handful of scripts, entered a few contests and did quite well. Gaining a place on the BBC’s Writers Academy scheme became my next aim. I applied, I didn’t get in. So back I went to the contest entries and letter writing. I got some good feedback on my work, encouraging rejection letters and a recommendation to ITV’s New Writers scheme, their version of the Writers Academy. Then came a letter saying the scheme had been put on hold…. they would keep my details on file, please find a list of other opportunities enclosed. One of these was TAPS, a charity running training courses for TV writers. I applied, I was accepted – I didn’t have the course fees. This was not the time to give up, so I applied for a bursary, and Northern Film and Media met half the cost. I soon found myself in Leeds, writing scenes for Emmerdale with Bill Lyons giving critiques.

There were no openings on the Emmerdale team, but the first series of The Royal Today was about to go to air, a second series was to be commissioned; they would take a new writer with promise under their wing.

A few months later the tabloids were awash with TV-related headlines: ITV cancels flagship show, Heartbeat axed. The Royal was to follow, along with its daytime spin-off and with it my fledgling career. I maintain that sometimes sulking is good for you, and this was a time to sulk.

By now I was working in specialist factual TV production – history, heritage, archaeology – all good subjects and great fun to work on. But any day now the BBC would be opening applications for another year’s Writers Academy and I was prepared. When the Writersroom email finally arrived, I didn’t expect it to announce the scheme was being put on hold. Breaking in as a TV writer is difficult, especially if your confidence has been knocked. I gave up on the idea for a while.

There’s a motivational quote that kept popping up on Facebook and Twitter, along the lines of ‘Never give up on something you can’t go a day without thinking about.’ The economy was in recession, work was scarce, money even more so. I had time on my hands; I had to try again.

There are quite a number of free-to-enter writing contests if you search carefully. Prizes range from a few quid to professional feedback to places on workshops. At first I wasn’t getting anywhere; writing is something that needs practice, I knew that and yet I’d let it drop. Eventually I got back to being regularly longlisted, then an occasional win.

One prize I did want to win was a place on the Story for Screenwriting online course developed by John Yorke and the Professional Writing Academy based on his book Into the Woods. This was a logline contest; I set my entry in. I didn’t win but I was offered a discounted place on the course and access to an online chat session. But there was the question of course fees again: maybe I could get a grant?

There are schemes which give grants for courses; its a case of doing your research to find out which you’re eligible for, since most have restrictions, based on where you live, your gender, ethnic background and so on. Creative Skillset had a scheme for TV training, so I applied. My application was rejected on two counts: the course was more than 10 weeks, so didn’t qualify as a short course, and one of my two required TV credits in the last two years was on Australian TV, so wouldn’t count. I would have to find the money elsewhere. There were quite a few funding schemes, but none of them were a perfect fit.

Last autumn PWA announced they were launching an intensive version of the course, and I was offered a place. This was an 8-week course and I now had the two British TV credits Creative Skillset required. The TV training scheme was now closed, but they did have funds under the Diversity Scheme. I matched all the requirements, so sent my application in and was accepted. 80% of the course fees would be paid, I only had to find the other 20%. I’ve done a lot of short courses since I graduated, I’ve always completed them, but it is quite common for people to drop out. If your fees are being paid by a grant, dropping out is not an option.

I expected the Story for Screenwriting course to be tough; I’d had a brief chat with another writer who had completed the 16 week version. I wasn’t disappointed: it was tough and got tougher as the weeks went on. But I loved it. We were studying a mix of film and TV, ranging from Jaws and The Godfather to Life on Mars, Casualty and EastEnders. We were a small group, fairly evenly matched in ability and previous experience, with a range of interests and varied day jobs. It was a real challenge, time was so short for the volume of viewing and reading before you even began to apply the principles learned to your own writing and to critiquing your peers.

Looking back, it was a whirlwind and I have absorbed more information in the last few weeks than I ever thought possible. In the first week of the course we were asked to consider our own viewing habits. I found myself dividing the shows I loved into two categories: those I thought I could maybe write and those which were too ambitious for my skills. Eight weeks on, I view the same shows with a very different eye. The two categories have changed: the first is now labelled ‘shows I could write’ and contains a list of most of my viewing; the second has been renamed ‘shows I’d be able to write with a bit more practice’. Both these categories are considered with the support of a production team, for TV writers are part of a team and the feedback from tutors and peers is a large part of the learning experience.

There’s a certain sadness in completing a course as good as Story for Screenwriting, but it doesn’t end here; each member of our little group has gained a raft of skills and has written a first-draft treatment for our own idea. Which John Yorke has given us notes on.

Now is not the time to sit back. John’s notes on my treatment signpost my second draft. I’ve joined the Alumni group to maintain contact with my peers to continue to critique and discuss each others’ work, and to drop into live Q&A sessions with John. The principles learned are equally applicable to my documentary films and short stories – but the main thing I take away from the course is confidence. Confidence in my own ability to meet a short deadline and deliver a piece of work which may not be perfect, but can be easily fixed. Confidence that I am able to take notes on my work and rewrite the piece before the next deadline. Confidence to knock on the doors of any production company. Confidence in creating characters of my own and the world they inhabit, but equally the confidence to step into an existing fictional world and take the characters who live there on a journey, be it into the woods or to their local. Confidence to say ‘I can do this.’

I leave you with a popular phrase from my childhood, ‘There’s no such thing as can’t.’

For details and to book your place on our next screenwriting course, see our Story for Screenwriting page.