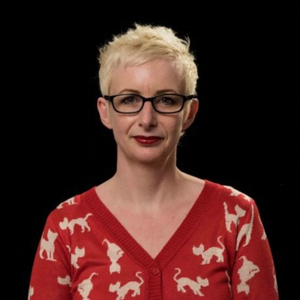 Emma has been telling stories for as long as she can remember and made her first film at 15 – the story of a love affair tragically cut short by a deadly brown Ford Cortina.

She has worked in the industry since the early 90s as a Development Producer for multiple broadcasters and independent production companies alongside writing for the likes of Ant & Dec, The Chuckle Brothers and the director Ken Russell. She has put words in the mouths of Muppets and taught the Channel 4 audience how to make convincing movie vomit.

Emma has been working in the factual landscape for more than 20 years. She has a factual entertainment show going out on BBC1 early in 2023 and multiple projects in development with various channels.

In her work as a Development Producer, Emma has created hundreds of pitch decks and watched with interest as the industry becomes more and more deck focussed. As a Script Consultant and Mentor, she has helped many clients not only improve their stories but also find the best visual way to pitch them to industry.

She teaches screenwriting at several film schools and is passionate about finding the perfect format for every individual story, working to make them the very best version they can be.

Trust your instincts. Work out what your idea is ‘really’ about in terms of theme and let that inform all of the choices and forks in the story road you come across as you build your world.