How do you approach writing an expansive, multi-protagonist interactive drama like As Dusk Falls? We speak to INTERIOR/NIGHT's creative director Caroline Marchal and lead writer Brad Kane about the process.

Caroline Marchal heads London-based studio INTERIOR/NIGHT, where the focus is on making original interactive stories that sit at the crossroads of prestige television and video games. Their first game is the highly anticipated Xbox exclusive As Dusk Falls, available now to play solo or multiplayer.

To us, Caroline is also the co-creator and brains behind our flagship Story for Video Games CPD training course, developed with John Yorke and taught to the industry’s next best writers.

We chatted to Caroline and lead writer Brad Kane about the narrative design and writing process behind As Dusk Falls, from their inspirations to ensuring a satisfying player experience for every branch of the narrative.

We don’t believe in bad endings or dead ends. The idea is to always create an experience that feels like an episode of TV or a movie, so no matter what path you take…emotionally it should always feel satisfying and complete in terms of the story experience.

What inspired the narrative of As Dusk Falls?

Caroline Marchal: We started by wanting to make an interactive story inspired by prestige TV shows so that players can really just enjoy a mature, compelling story with people they love, discuss their decisions, and in the process, learn more about themselves. So we started looking at crime dramas, because it’s a great genre, where you’ve got high stakes and super stakesy decisions, and also, the more relationship-type of choices like: are you going to stay married with your wife? What’s going to happen to your family? How is this little kid going to grow up and what kind of person is she going to be? So we looked into shows that we love like Fargo, the TV series, Breaking Bad, but also movies like Dog Day Afternoon, because it’s got this wonderful super pressure cooker setup with a hostage situation, and a bank robbery that goes really wrong. So it started like this.

Brad Kane: We all had worked on narrative games before and there’s a little bit of – you see sometimes new players in the field come at it from a gimmick standpoint. And I think that our feeling has always been that there’s no reason that you ever need to approach a game from a gimmick standpoint. We really wanted to create top tier prestige, quality stuff, you know. In my spare time, I’m watching the best shows that are out there, following the Emmy winners and just looking at the quality bar. And I’ve always felt like, when you write something, you should just come at it from the perspective of ‘I’m going to make the best thing there is’, the best thing you can do. And, you know, we don’t just attach choices to it, but we really we come at it from the perspective of what would it feel like to do a prestige level interactive drama and that’s kind of been the inspiration from the start.

Who did you write As Dusk Falls for?

CM: For people who love narrative games, but also for the ones who, as Brad says, enjoy watching shows, but think like well, maybe games aren’t for me, it’s too difficult, etc. So we really want to bring those people into video games and tell them well it’s actually okay because what you need to play this game is your life experience more than your skills. So you know, thinking about the couple once their kids are in bed at night time, they’re on the couch, like ‘shall we watch a show?’ ‘No, no, no let’s play As Dusk Falls tonight’. Really these kind of people. And maybe in your household one person is a gamer, but the others aren’t. So it’s like an occasion for the gamer to share their passion with people they love, people in their life. It really came from that, so it’s or, you know, your friends at dinner, or your sister who lives on the other side of the country, and then you play online together a really cool story.

How did you approach designing the narrative for an expansive, multi-protagonist experience?

BK: You know, I always talk about this as algebra, like it’s a kind of, it’s a verbal obvious thing for writing screenplays. But there’s this logic side to it. And in terms of process, we start in the room with walls of post-its essentially, well, they’re blank at the beginning, but the future of those walls is post-its. And we’re coming at it from just two perspectives at once, trying to make a really good story and then also trying to create an experience for a player that gives them agency over the narrative and respects your decisions because we believe choices need to not just matter but be the driving force behind the experience. So it’s very much kind of this verbal slash math process that is hard to describe and hard to replicate. But it gives us headaches, and we spend more than we should on Starbucks. Non Starbucks! I get called out for Starbucks, coffee from independent earth-first brewers.

CM: Yeah, well, as Brad says, it’s like writing for a movie but in 3D, because it’s so modular, that you can come from one place and you experience it as a player in a linear fashion but under the hood there’s so many other things that could happen. So we structure you know, we look at every chapter, or even season from tentpole choices, like we know we need two or three. And that just gives us the structure of the episode and then we can weave in a lot more smaller choices that have consequences across maybe multiple chapters. But the ones that the player will remember and create the big branches for the chapter, we start with that, as well as the arcs of the characters, like how many endings can a character have and what are their multiple arcs.

What you need to play this game is your life experience more than your skills.

BK: It’s worth saying too, we don’t believe in bad endings or wrong endings or dead ends. So the idea is always to create an experience that feels like you’ve had an episode of TV or movie experience, no matter what path you take – the paths are very different – but emotionally, it should always feel satisfying and complete and sort of correct in terms of the the story experience of it.

CM: That’s the hard part of it, actually, because you’ve got no game over. Writing a branching story with loads of dead ends is kind of easier than just making sure the story keeps flowing. So you can experience setbacks, and maybe lose a character but the story carries on. And as Brad says, in life, right, you know, a lot of things are bittersweet. It’s sad and joyful at the same time. So we’ve got all these layers in the story, and there’s no golden path, like, ‘Oh, this is the good ending, oh, well done, you succeeded’. No, it’s like you craft your own journey with all those characters and influence their fate. And that in itself is satisfying, because it is a reflection on your own decision making and your thought process and your values as a player.

What was most important to you when designing your characters?

BK: Well, character, you know, we start from a place of relatability, and empathy. We use a range of characters from different socioeconomic backgrounds, different racial backgrounds. But there’s a whole world of research and there’s a lot that goes into that. But at the core, we’re looking for characters who you can connect to, who you understand, who experience the same things we all experience in life, in terms of having relationships, people we love, things we’re scared of, things that aren’t in our control. So we tend to build these characters up, kind of as a composite of what we think that their emotional experience would be like, who they are in the world, and then also a little bit of something that’s unique to this format, and thinking about, again, how this character gives us the opportunity to allow the player to shape the character or to shape the characters that person relates to if it’s not a player character. So there’s always this extra element of how can we put people into the shoes of this character and give them control over this character’s world?

Can we ask…who is your favourite As Dusk Falls character?

BK: It’s so hard to say because, you know, they all come out of us. It’s like having a favourite baby or something. Different characters at different times, maybe?

CM: I think, yeah, that’s a really difficult question. I love them all. The one, maybe that breaks my heart the most, is Tyler, the eldest brother of the Holts. Because he’s equipped, he’s smart, but he’s not emotionally equipped to be happy, I think.

BM: I’ve always liked Vanessa, the acting is amazing and I kind of love how she’s turned out, but even on the page, I think there was something about the combination of naivety and strength that was always appealing, that she’s someone who takes bold moves, maybe for the wrong reasons. I always liked that and I especially like as the player, how you might direct her story to turn out in some radically different ways.

Find out more about As Dusk Falls here. 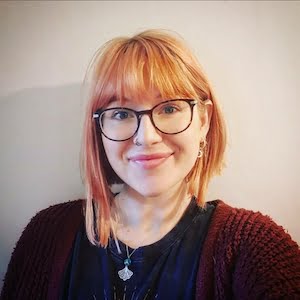 Interview conducted and edited by:

Emily Ronan is the content and marketing manager at John Yorke Story, with a background in writing (MA in Professional Writing), UI and design.

She worked as a story development assistant for As Dusk Falls, an original interactive drama developed by our Story for Games course director Caroline Marchal’s studio, INTERIOR/NIGHT.